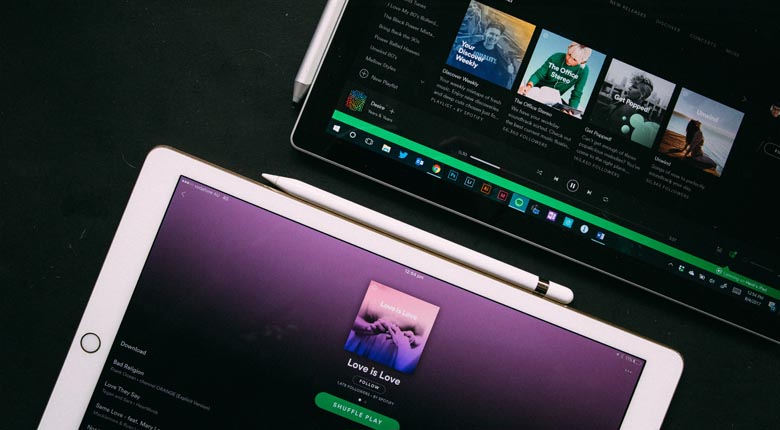 Spotify has come a long way. The Swedish company bridged the gap that previously existed between purchasing MP3 tracks online and listening to your favorite songs.

First launched on October 7, 2008, and getting into the United States in 2011, Spotify has improved the way people enjoy music.

In this in-depth guide, we’ll discuss Spotify statistics under different categories. This would give you insights into the company and how best to position your own startup, even though you may not be into music streaming via the internet.

Spotify is a digital music service that allows you to access, download, and listen to millions of tracks on any device.

Rather than purchasing MP3 files from iTunes and other platforms, you can stream music on Spotify over the internet.

You don’t have to worry about copyright infringement since you don’t own the tracks, but the good news is that it’s completely legal because Spotify pays rightsholders.

Users can know the exact songs people are listening to around the world, and what songs they share the most using the Musical Tap of the World 2.0.

Discovering new music and artist has never been this fun. When Spotify came on the scene 10 years ago and officially launched to fans, it grew gradually, meeting the needs of music lovers around the world.

If anyone had told me that there would be a better alternative to piracy — one that helps to fairly compensate rightsholder, artists, and songwriters for their work, I might have doubted it.

According to Spotify Newsroom, the company had reached a milestone of 180 million monthly active listeners across 65 countries.

Spotify is loved by the majority of people who prefers to stream music and listen on the go, instead of having to download an MP3 file from other platforms.

2. Over 4 million songs on Spotify have never been accessed or played at least once by users

Although Spotify makes it extremely easy for artists and rights holders to spread their music and get discovered. That’s exciting until you discover that millions of songs on the platform have never been played once.

According to Spotify’s findings, 80% of the 20 million songs on the platform as at 2013 have only been played once. Looking at it the other way around, it means that 4 million tracks have never been played, let alone enjoyed by users.

All hope isn’t lost though.

There’s a new service that helps you to discover previously unheard Spotify songs. Since millions of songs have only been played partially or never at all, Forgotify.com is your best shot.

Social media can be stressful and fun at the same time. For startups, social media exposes them to them to the world where the ideal audience can easily find them.

With several platforms out there to choose from, you can embrace social media to give life to your best content.

And that’s exactly what Spotify did. They created buzz and sometimes controversial posts to engage the audience.

And I’m not talking about the latest musical artist or celebrity Twitter war or some Facebook rank, I’m referring to real entertaining content which social media users quickly fell in love with.

When it comes to social media, selecting a platform that’s ideal for you can be tricky. Spotify faced the same challenge in deciding whether to build traction on Twitter or Facebook.

Since the company isn’t interested in bantering with fans, which works well on Twitter, they channeled their focus somewhere else.

In the end, finding your social media platform is the key to winning more social media fans. And Spotify is still on track on Facebook with millions of hungry music lovers and artists keeping updated on their latest post.

4. Spotify has more than 83 million paid subscribers and has about 40% of the global music streaming market

With 83 million premium subscribers already, Spotify still has a long way to go, considering that its closest competitor is Apple Music.

The CEO of Apple Tim Cook recently said in an interview with Bloomberg Television that their music subscription had acquired 50 million paid subscribers already.

The music streaming market is getting hotter and big players are getting in with everything within their arsenal. Will Spotify sustain this growth or allow its competitors to outsmart them? Only time would tell.

5. To stream the best quality music on Spotify, a premium user consumes 2.40MB per minute, which equates to 115.2MB every hour

Paying $9.99 a month to access tracks on Spotify Premium means no ads to interrupt your groove, unlimited song downloads to your mobile device so you can playback offline — all of these comes with another cost.

To stream the best quality music on Spotify, a premium user consumes 2.40MB per minute, which equates to 115.2MB every hour. This costs more than Apple Music streaming.

There are several options for streaming songs. When you turn on the “High quality streaming” option, you’re able to stream at 320 kbps (normal streaming is at 160 kbps). This allows you to get more “juice” of the song per second. Overall, this quality is richer, sounds better, and provides the best experience.

When you apply the amount of data consumed by 8 and if you’re listening to your favorite music all day at work that will equate 1GB of data. The good news is that this is still cheaper than streaming videos on Netflix and other platforms which consumers around 1GB per hour!

To save data, make sure you reduce the audio quality from the “settings” to 160 kbps on Spotify and you’ll end up using 1.20 MB per minute and about 72 MB per hour.

6. Over 5 million playlists get created or edited daily on Spotify

It’s time to jam out in style with your preferred playlist on Spotify.

Spotify’s playlist is huge. There are over 5 million playlists on Spotify already. You could get lost in Spotify’s playlist library and it’s worth it. On the platform, there’s a playlist for every genre, every season, and every mood you’ll ever have. This can include hundreds of songs — this makes it a lot easier to stream new songs without bumping on the same playlist over and over again.

Artists and rights holders can make their own playlist. For users, though, it’s a lot easier to discover music on the playlist than to create one.

At Spotify, the ultimate goal is to match every user (i.e., listener) with the right music for them. Hence, artists can submit music for possible inclusion to the perfect playlist.

That’s one of the reasons why there are over 100 editors around the world — comprising of cultural ambassadors and music professionals whose sole job is to promote songs on the platform, spread the joy of music discovery around the world, and help listeners easily navigate their way around Spotify.

Currently, there are over 40 million tracks and podcasts, and more than 3 billion user-created playlists on Spotify and the future looks promising.

In 2015, 75 million Spotify users and listeners enjoyed over 20 billion hours of their favorite songs. The platform allows listeners to discover more tunes through the “Discover Weekly” personalized playlists. As a result, more than 2 billion playlists were tuned in.

Most artists topped the chart for the most-streamed songs in the same year. 46 million listeners streamed Drake’s songs 1.8 billion times, beating Ed Sheeran, who was at the top of the most streamed artist in 2014.

Did you know that millions of Spotify listeners are getting attached to Spotify already? Well, according to a Nielsen study, By mid-2017, Americans had requested 184 billion streams via Spotify and Apple Music alone. It seems that this demand isn’t stopping anytime soon, especially when you consider how many users become paid subscribers on Spotify in 2018 — 83 million.

8. Spotify has paid over 10 billion euros to rights holders since launch in October 2008

Given that Spotify now pays music rights holders $288 million each month, which adds up to over 10 billion euros paid that have been paid out since launch, it’s interesting to see why Spotify is celebrating their 10th anniversary.

The company laid emphasis on “a decade of discovery” and covered new stats on the “listening diversity” of its users.

There’s nothing more fulfilling than realizing your dreams. In this case, we envisioned a future where artists are fairly compensated for their work while making it a lot easier for users to stream music over the internet.

Spotify’s growth rate is alarming. Just before the NYSC listing, the music app was valued at $19 in 2017, which is up from $16 billion in September 2017. It’s outperforming U.S. and European techn indexes, according to a report by Reuters.

This also comes with a 20% gross margin increase.

With Tencent purchasing new Spotify shares, it could mean an upward growth in valuation of $5,000 per share.

Even though Spotify is still penetrating the music industry, and in the process, losing money, there are plenty of positives that can be attributed to the company’s second quarter earnings report as a public company after losing $1.5 billion in 2017.

Spotify makes a compelling case for itself by going public. Interestingly, in the Q2 2018, Spotify reported an Annual Revenue of $5.6 billion from a total funding of $11.3 billion as of March 2016.

Everyone, whether you’re a listener, a music lover, a music artist, manager, label, or you’re part of an artist’s team, Spotify can bring you, not just entertainment, but fulfillment.

With an improvement in the playlist, Spotify is projected to double its monthly users and premium subscribers, since the platform is providing the right experience for everyone.

Between the expert-curated playlists: Hot Country and RapCaviar, and other personalized playlists which you’ll find on “Discover Weekly” and “Daily Mix”, Shopify is making the world of music streaming a lot more rewarding, and positioning itself to support millions of curators globally.

Looking for Something Else?